Wyong kicked off its 2022 Denton Engineering Cup campaign with the local derby against The Entrance at Roos HQ on Saturday 26 March. An hour prior to the start, Morry Breen Field was struck by a tropical downpour with the ingoal areas at both ends underwater. Fortunately, much of the water had subsided by 3.00pm, but it was heavy going for both teams as squalls continued to roll through the area all afternoon.

The home team looked the most likely in the early exchanges and controlled possession better than the opposition. Wyong almost scored in the 9th minute. Mitch Williams darted right from acting half. As the defence moved to shut down Williams, he kicked crossfield with precision to the north east corner. The scoring opportunity vanished when the Roos failed to latch onto the kick.

First points came in the 12th minute on the back of sustained pressure from Wyong. Possession changed deep in Tiger territory. Roos half, Lachie Hanneghan, poked his nose through the visitors’ left edge defence and cleverly offloaded for Kye Hopwood to score. Hanneghan converted for a 6-0 lead.

The Roos crossed again in the 17th minute. Hanneghan was clipped by Tigers back rower Harley Ridge after a late tackle kick. The resulting penalty saw play restart on The Entrance 20m line. Wyong probed to the right of the posts and centre field, then shifted the ball to the left to Steve Gordon positioned on the outside of his marker. Gordon touched down. Hanneghan missed the conversion from wide out. Roos 10-0.

Two minutes before halftime, Wyong conceded a penalty whilst in possession. The Tigers worked upfield and into an attacking position. Will Pearsall kicked toward the south west corner, isolating Roos winger, Cody Boyle. The ball went to ground in the contest. Shaun Corrigan grabbed the ball and scored amidst claims the ball had been knocked forward. The try was confirmed but not converted. The teams went to the break with Wyong ahead 10-4.

Ten minutes into the 2nd period Wyong was slow onto a late tackle kick from The Entrance. Matt Nelson toed the ball into the Roos ingoal and earned a drop out. The Tigers scored from the ensuing possession set creating an extra man against the home team’s right side defence. The try was not converted but the scoreline had narrowed to 10-8.

Cue Luke Sharpe. The Roos fullback took a quick tap from a 53rd minute penalty on the Tigers 40m line. Sharpe then stepped, accelerated, ducked, weaved and broke several tackles to score beneath the posts in a remarkable solo effort. Hanneghan converted to push Wyong out to a 16-8 lead.

The Entrance was not done. Wyong conceded a penalty for dissent in the 68th minute. A right side raid found the green and gold short of numbers causing defenders to jamb in from the outside. Ridge rounded his marker and was too quick for the cover on an angled run to the corner. Ridge’s try was not converted.

Wyong was floundering in the dying stages but managed to hold on to win. The Entrance were brave, missing several top liners and despite the early setback, took the fight to the Roos for the whole 80 minutes. 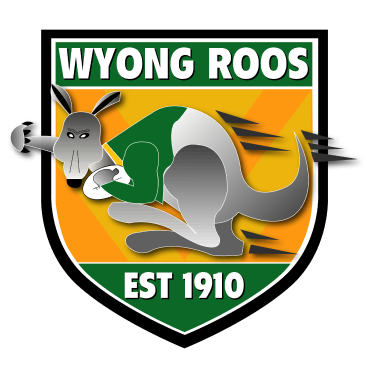